Just spent the week with my family in Teton Valley and Grand Teton National Park. After four days of kids, mosquitoes and me biking every day my wife is not going to divorce me so it’s been a great vacation. Of course as I type this Callie is giving me grief that of all the things I write about it’s the biking so stay tuned on the divorce front.

Actually, Callie is a great wife and very patient to let me get up, abandon her to get the kids ready and ride for a couple of hours each morning and once in the middle of the day. I’m not winning any father of the year awards but she might deserve sainthood. I owe her big time and so once again I offer to purchase her any bike she likes. (and we’re going on vacation again this next week with her family and I’m planning on taking the bikes so I need points).

It’s amazing how hard it is to find a place to ride. I keep thinking that the Internet is an omnipotent source of all truth and knowledge, but there’s not much online about riding in Teton Valley. I knew there was a bike path since I’d seen it before and my dad was a part of that project, but other than that it’s hard to tune into the local biking scene unless you are a local. (It’s the same everywhere I go). I finally found some maps hidden on Teton Valley Trails and Pathways. They’re stowed away under resources -> maps. The one I found most useful is the TVTAP Cycling Map which listed a couple of rides that looked like they made sense..

We stayed at a great cabin in the middle of the valley just a few miles north of Victor. Since it wasn’t far from the bike path that goes from Victor to Driggs I was able to utilize that path the first day and do “The Loop” – a 25 mile loop around the main part of the valley. I normally avoid bike paths when riding at higher speeds since slamming into a pedestrian makes them really mad and there’s really not much glory in passing a 5 year old on his BMX. However, in Teton Valley early in the morning the bike path is relatively vacant, and you want to avoid the section of highway it parallels unless you have a lot of life insurance. Between the tourists gawking at the scenery, the locals treating it like the autobahn and the fact there is no shoulder your likely hood of early death.

This year the water is high all over the inter-mountain west. We’ve had plenty of flooding in Cache Valley and Teton Valley has seen similar issues. The entire valley floor is pretty much a giant swamp that collects the run off from the surrounding hills. I was glad for my cross bike on day one while doing the loop since the bike path had become a channel for one of the local creeks. The road across the valley from east to west had low traffic and was fast. I did have to stop to take a picture of a bald eagle: . The TVTAP cycling map mentions that the west side of the loop has a 2 mile section of gravel road that’s not a big deal. I’m sure if you don’t love your road bike you can ride it just fine, but I’m pretty fond of my carbon wheels and the paint on my road bike so again the cross bike was a great choice for “The Loop”. I cut the ride a bit short and came back across on North Cedron road which is the road where the cabin was. It’s downhill from the main road so was able to hit it going 24 plus MPH which was fun until I hit a section of the road where for some reason they decided to dump the remains of a stone quarry. I nearly wiped out when the gravel turned to 3-4” rocks. Callie doesn’t like it when I go to the hospital so I dropped my pace and did some swearing. The next section of road was under water, but being a man and all I couldn’t let that stop me. I was actually surprised when it didn’t and saddened that no one was around to see it. The creek there had cut a channel across the road that was a foot deep which buried the bottom half of my bike in liquid. I’m guessing that’s why my power meter doesn’t work anymore. 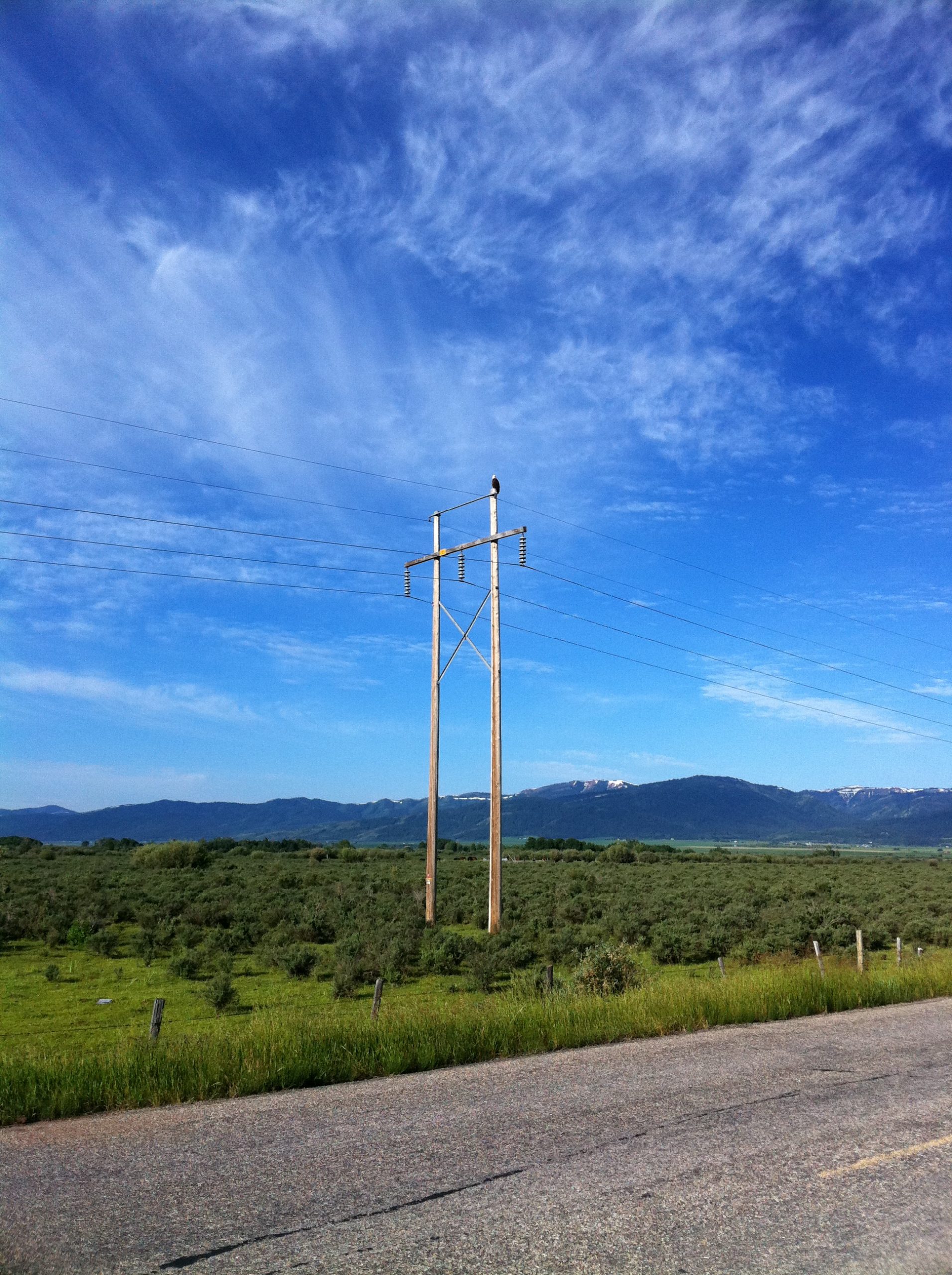 I slept in the next day and so decided I would just do a quick up and down the bike path. It ended up being about 20 miles and I totally left several bmx riding 5 year olds and a couple of old people in the dust. The bike path trip was actually to scout out places to park in Driggs so I could ride Ski Hill road. It felt pretty wussy to drive 8 miles so I could ride my bike, but surprisingly the point of a family trip isn’t to avoid the family so I had to keep my rides short. I also checked out the local bike shop Peaked Sports – sort of anyway. I rode by. I have a history of racking up grounds for divorce credit card bills at bike shops so I thought it best that I look from a distance. They rent bikes so if you don’t bring your own you can still ride. Personally I prefer to bring my own stuff. It feels weird to play with other people’s equipment.

I saved Ski Hill road up to Grand Targee for the last day. After that ride I’m totally ready to buy one of the foreclosed cabins and spend the rest of my days just riding up and down the mountain. This is what it looks like:
.
If you are in town for one day do this ride. The pavement is smooth. The road ends at a ski resort so there’s not a lot of traffic. The views are spectacular. I get the impression that this is the ride the locals do since I saw quite a few other bikers. I also saw a group of 3 skateboarders coming down the road. I think they were on a suicide mission. 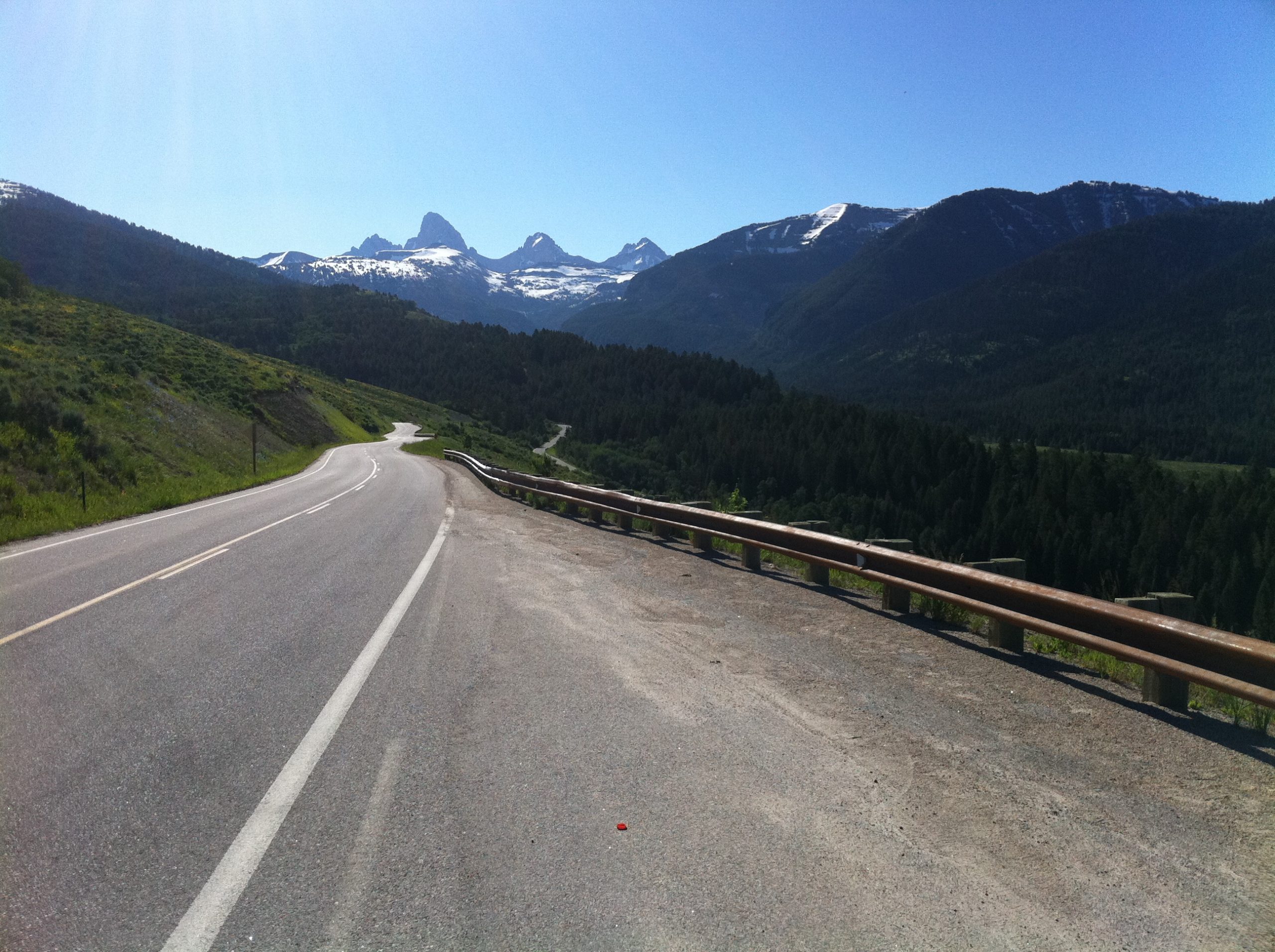 There are a few other rides I want to do but didn’t have time. There’s a bike path from Tetonia to St Anthony that follows the old rail bed. My dad also did the engineering for that trail and has ridden it on a motorcycle and said its an amazing ride. (It’s closed to motors now. When my dad did it they hadn’t put a deck on the old rail trestle. He said it was a rush to ride that high up across the railroad ties without any railing.) That path is gravel but flat and seems like a great candidate for a cross bike.

I didn’t do any mountain biking since I didn’t have the time or my mountain bike, but the map lists a number of local trails which look amazing. You could spend several weeks riding and not cover the same ground. Given that I’m not a pro-biker and that I’m not retiring I probably won’t be taking up permanent residence in Teton Valley any time soon, but we might have to start taking a few more family vacations to the area of the next couple of years.