A few days ago I broke one of my bottom front teeth. Luckily it didn’t hurt, but I figured I should get it fixed. That started a serious of events that led to one of the more painful experiences of my life. They started to fix my tooth but then I mentioned that I had considered whitening my teeth at some point. Since they need to match the color of the filling to the color of your teeth I chose to hold off until I could get my teeth whitened. They couldn’t get me in for a while, but I made an appointment and they put me on a call list in case they had a cancellation.

They called this morning and I went in. First they cleaned my teeth. I had a couple of cavities as well. I hate having a numb face all day so I had them do the cavities without the drugs. It hurts a bit but is bearable. Then I had them whiten my teeth. That takes and hour and involves putting in a dental dam which is actually pretty miserable. After that they do 4 bleachings. The dentist told me that my teeth might be sensitive for a while. Sensitive does not describe the hours that follow.

I wouldn’t have guessed that bleaching your teeth would be the same as suffering for all your sins in hell. Remember the part where I didn’t have them use novacaine? That procedure was preferable to the pain that constantly throbs through your teeth for hours and hours. I finally got desperate and checked around the net and found a mouth was called Theradent. I figured it wouldn’t hurt so I drove all over town and found some at Smiths. It wasn’t cheap but I’ve found that when you are in pain you don’t care what things cost. I’ve used it once so far and it makes a big difference – the pain doesn’t go away but becomes bearable.

Needless to say I am done with the teeth whitening thing. I would rather deal with off color teeth than be tortured like this again. 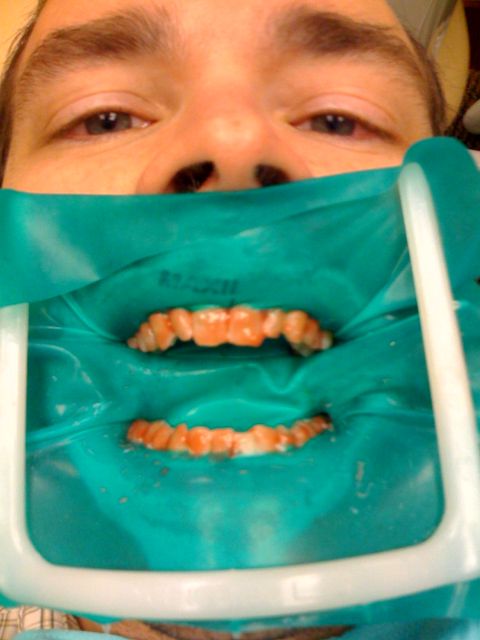